The sultry sun falls towards the western horizon as a late rising tide initiates thousands of intricate predatory relationships. Mangrove crabs and shrimp shift through the sand for tiny bits of organic debris. Bonefish by the thousands are also amongst the ritual, crunching away on these crustaceans scuddling across the flat.  But nobody is safe here, and the serenity gives way to chaos as a sudden flash of teeth rips through the tailing fish. The circling sharks become more numerous as the water floods in from the deep, and as we scan for a final bone to cast at we have the realization that we may have just inadvertently stumbled barefoot and burnt onto the menu ourselves. 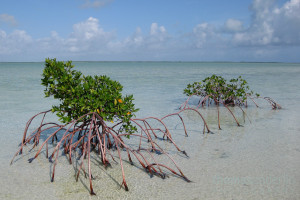 Back at camp we joke about surviving another day in the food chain as spiced rum begins to flow. Drinks go down with the sun, and a glowing fire slowly cooks a pot of bruised conch we collected during the mid-day low tide. Once we finish the epic feast a few gnarled pieces of driftwood give our smoldering fire new life. Another ration of rum and the crackling inferno awakens a primal instinct within. The purist fly only hats we wore so faithfully throughout the day are hung on a tent post to dry, and we start preparations for an exciting night out with the locals. 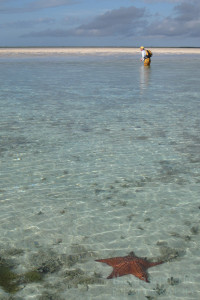 But our self afflicted marooning means the nearest rum shack is miles away, and the only lights are those of the stars on this remote cay surrounded in pearly shoals and mangrove swamps.  We did, however, come prepared for a bit of action, as we knew that the most prominent predator of this estuarine ecosystem was a finned marauder notorious for cruising close to shore at night in hopes of surprising the unwary or the unwise. Lemon sharks from 15 to 70+ pounds had been pillaging our bonefish throughout the day, and we knew our chance at getting even had arrived. 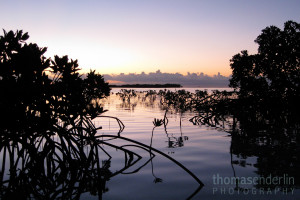 The plan of attack involved stinger rigs and light spinning tackle. The first component of the stinger, a barrel swivel, helps keep the wire from folding and twisting as sharks death roll in the shallows. Then comes the wire itself, 20-30 pound test to weather the teeth that made Jaws famous. The terminal bit is a 6/0 circle hook attached via small crimps, and off the eye another short piece of wire holds a treble, which gives the stinger its name. A late afternoon barracuda already attracting sand flies on the beach in front of camp would be carved as bait, and although the entire combination looked horrendous and was even less aerodynamic we knew the poignant scent of the freshly caught fish would electrify the bloodhound within each shark and have them waiting online for a taste. 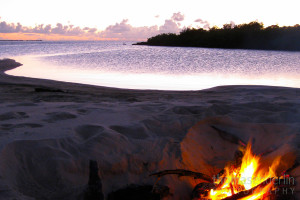 Sharks can detect minuet amounts of blood diluted in water and are drawn to the source. This makes oily bloody bait incredibly enticing and productive. While daytime sharks will curiously follow streamers and sometimes even strike, a piece of barracuda is a much more effective method of attracting the attention of the man in the gray suite.  The hooked piece of flesh would deliver exactly what the lemons were honing in on; they are reputed to have poor eyesight and rely on their delicate senses to locate prey. This adaptation is especially alarming during the day when often times we were forced to throw handfuls of wet sand towards sharks only a few feet from our exposed ankles to noisily scare them to a comfortable distance. The inquisitive sharks were undoubtedly engrossed in slight traces of fish slime left on our skin after handling bonefish. Now the time had come to feed the fishes, to tangle with the apex predator, and to add to the evening’s luck an offshore breeze was slightly pushing the floating oil slick away from our camp outpost and creating an avenue leading hunting sharks straight to us. 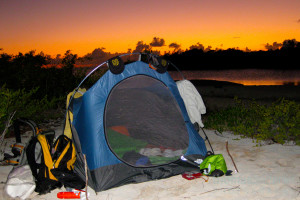 Rum drinks are also an essential component of getting down with the old salt locals in any tropical venue.  Typically the bite turns off until the very moment a freshly poured concoction reaches the angler’s eager fingers.  As if the sharks know that rations are tight they masterfully attempt to spill our drinks, and in perfect form the first sea dog comes calling after a few minutes of patient waiting and drink mixing.

Allowing the shark a second on free spool before striking means the bait can be completely swallowed, but the nature of the circle hook is to never gut hook fish. As the Lemon turns on the now taunt line the hook’s form permits it to be pulled back into the corner of the mouth to set in a way in which very little damage is done. Even so, sharks are a shockingly resilient brood. They have swam the world’s oceans for hundreds of millions of years, gawking at events like meteors hurdling into the earth and ice ages that wiped away heroes like tyrannosaurus rex. Proof of such resilience would be breaking off a small shark night one only to catch the very same fish again on night two with our circle hook perfectly pierced into the crux of its jaw. What an opportunity as camping on the edge of the map does not afford the luxury of running to the tackle shop to replace lost or destroyed gear. Not only could we elevate the shark of the lip piercing that had no doubt made his fishy friends jealous but also win back a vital component that would keep us from killing the entire provision of grog in record pace due to peaceful boredom. 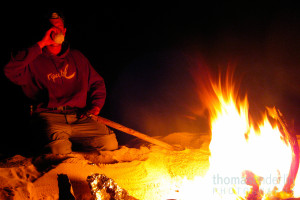 Splashing and zipping around in the skinny water, a bronze back and fin finally comes within range of our headlights. We bring it into the shallows, gently subdue it from thrashing across the beach, and remove the hook so it can swim away no worse for wear. The yellow cat like eyes and sharp rows of white teeth compliment a hansom soft amber color which helps keep Lemons concealed when stalking bonefish in the underwater maze of sandy dunes.

With a first shark beached, photographed, and carefully released we return to our drinks for a first sip but are abruptly surprised as a second comes calling 36 seconds after the bait hits the water. At first the shark swims parallel to the beach slowly shaking its head, but as it comes to the realization that the weight pulling it towards shore is not its loyal remora plucking parasites from its chin but terrestrial bipeds hooting and hollering it starts to rip line off the reel and head for the horizon. 100 yards turns into 250 yards and the center pin of the spool starts to show its shiny core through dangerously few wraps threatening to ruin our fishing night. Just in time the monster slows, turns, and a tedious retrieve begins. After what seems like a decade and several more attempts to outrun the substantial full length of line we finally manage to wrestle her to shore. The beach dance and shark rodeo becomes serious as we realize this is an animal far bigger and stronger then the comparatively small pups we had been playing with earlier in the night. Without much haste we very carefully remove the hook, snap a portrait and return the chomping goliath back to her watery kingdom. A newly risen moon gives the entire flat an eerie glow as the tall copper tail steadily beats her back out to a more comfortable cruising depth.

The party continues into the latter parts of the night and soon we have caught and released a number of these amazing prehistoric beasts. Throughout the evening our fire spits embers and rum drinks ignite the atmosphere; but finally a passing Lemon mauls the last piece of bait. Before retiring to our tent to rest for a dawn assault with fly rods as weapon of choice we hastily risk all to wash off the barracuda oil left on our hands. Every shadow and baitfish moving in the moonlight causes us to jump at the thought of what is really going bump in the night just beyond the safety of shore. With such wild locals making up the scene its no wonder bonefish are so notoriously spooky, but showing up at the party ready to tussle means our day stalking ghosts on the flat will be followed by another exciting night at the rodeo with Lemons on the prowl and rum in our mugs.

First published on the Saltwater Edge Blog in October 2009