Some time ago, I bought a 3 weight Scott S4 as my primary trout stick after losing the majority of my quiver in an airline debacle enroute to Yellowstone, and have since wandered to Central California in pursuit of love and a life unknown.

Being that the majority of my fly rods are for saltwater applications, double handed, or ultra light, I didn’t have the right rod to fish a local coastal stream after the season’s first big deluge… and so I grabbed the 3 weight knowing that it’s fast action and serious backbone would get the job done swinging streamers to the ‘half-pounder’ steelhead I’d likely encounter in this tiny coastal drainage. 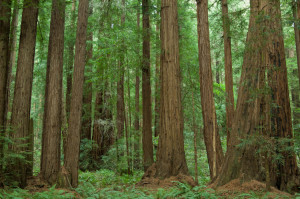 In fact, I had tested the extensively while still living in Newport, RI, catching schoolie striped bass in the harbor under the cover of darkness on the warm summer nights as they chased sand eels into the shallows. I knew I was ready if chrome lightning struck. 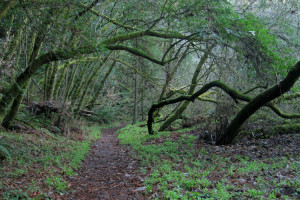 The river I was fishing was typical of most coastal rivers, draining a large swath of redwood forest and flushing hard through a steep gorge. It’s characteristics certainly didn’t make for a welcoming environment to survive as a fry or adult steelhead, but the local fly guys told me the genetic strain that used to inhabit this particular river was considered amongst the largest to have ever existed in California. Fish tales I said. 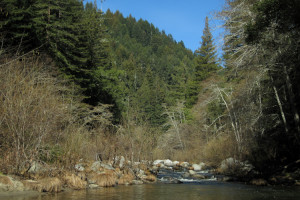 Even so, I swung my dark and auburn streamer with confidence through each undercut bank and more significant run knowing that the river, a car’s length wide and no deeper then about 6 feet max, probably wouldn’t cough up anything more then a few smolt at best. 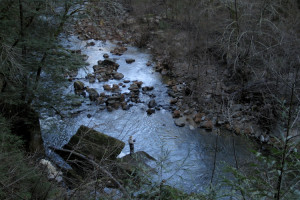 But I didn’t expect to encounter anything like what I actually did… and when my fly was grabbed on a swung streamer the half-pounder turned into a serious wild buck!

Due to the soft nature of the rod in light of the situation, the fish didn’t initially make the pool explode, rip 100 feet of backing off my screaming reel, or otherwise do what wild steelhead are known to do. And so I side pressured and found a good fighting/beaching position to get the little guy in. 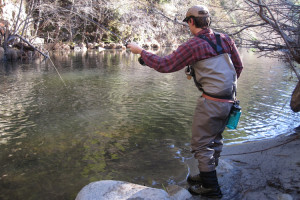 Suddenly, as if coming to see what this disturbance of its courtship of a hen was all about, the beast writhed hard on the surface, and at the sight of its wide shovel tail, broad shoulders and massive kipe my knees got weak and I started to curse the airline anew for losing my 5 and 6 weights! 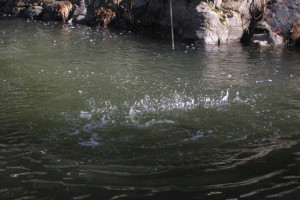 I fought the fish for well over 20 minutes, and the S4 allowed for some serious bend to turn his head repeatedly out of the current and keep him from running down or up stream.

To add insult to the injury already taking place, the state doesn’t allow landing nets on this particular stream, so after managing to beach him once and botching the tail grab I had to do it all over again after the fish found new will to escape. 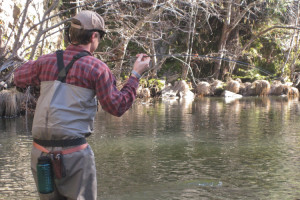 It sounded like a tuna, and wouldn’t give an inch. A couple of anglers, as well as my nervous girlfriend, had all started to form a crowd behind me. A few mumbles and some snide remarks about the size of my rod highlighted the crowd’s desire for a view of the goliath, but I still couldn’t seem to move him off the bottom. It was a stalemate of the finest kind. 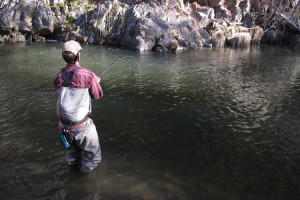 With slow angles and patience I was finally able to turn his head once more out of the current, and as he tried to swim back into his deep resting position I used unorthodox top pressure to turn his head downwards, and with deep bends into the butt section of the rod I was able to front flip the beautiful fish in a small stream version of a tuna death circle. 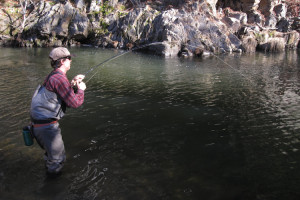 After a few such rod breaking maneuvers, advantage was once again on my side, and the disoriented buck finally swam into the shallows where I managed to get hold of his bass-like tail, snap a few pictures, and release him quickly to avoid any damage to this valuable endangered relic of ancient genetics. 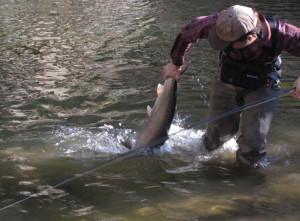 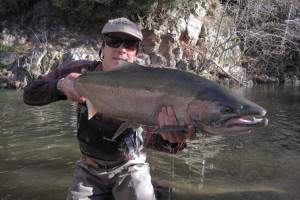 He was as wild as the river itself and fresh from the sea, with an intact adipose fin, majestic color on his cheek and flank, and dappled dark spots across his back. A fine specimen… 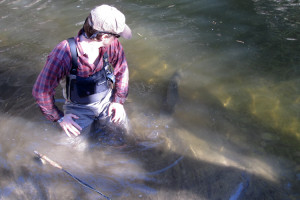 It was a wild experience to say the least, and one that broke my Central CA teeth in a most unusual way. A special kudos is due to Scott’s talented rod builders for the excellent quality of this monster slaying piece of art! 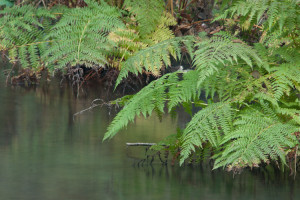 No comments yet. Leave yours to get the ball rolling.